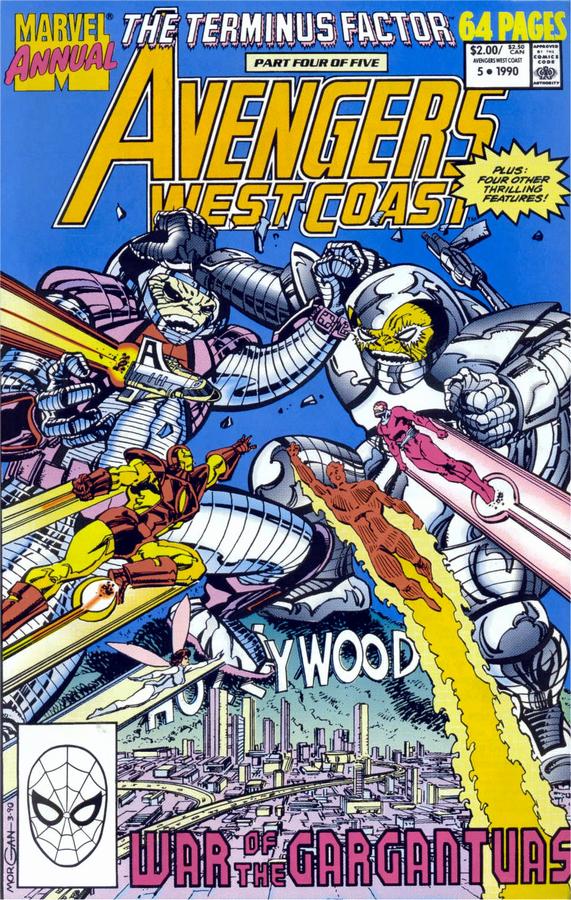 The Terminus Factor – Marvel’s big summer event – continues in this annual. Plus, lots of back-up stories! One could argue, too many back-up stories.

The first story picks up right after the events from the last issue (#62) with Pym reactivating the original Human Torch after his battle with the Scarlet Witch and Magneto. After getting him (and the readers!) up to speed, Quicksilver runs in the room to inform everyone (including Machine Man who is inexplicably present) that there’s an emergency. Hercules is in San Francisco “battling hordes of metallic beasts he calls Termini.” And they’re off!

When we see the threat of the Termini for the first time, Hercules is at the scene unloading a ton of exposition on the reader. Since this is the fourth part of a five parter running through the annuals, I admit it’s appreciated for someone who won’t be reading the other books. However, when he starts describing things that are happening in the panel, it unfortunately reveals that penciler Jim Fry isn’t exactly doing his job at 100%. Anyway, it seems there are two Termini fighting one another, one claiming to be the other’s “son”. That’s as deep as this is going to get.

Pym comes up with a plan involving mirror lenses, but he doesn’t bother to let anyone know what’s going to happen. He ends up buying the team a few minutes as the Termini separate, believing they following each other when in fact they’re following light-mirages. However, because Pym didn’t tell anyone what was going on until the last minute, they lack the coordination to make any impact in the few minutes they have. Eventually, everyone is knocked out of the game except Iron Man and Machine Man.

Eventually “Father” Terminus beats up “Son” Terminus so badly that he shrinks down enough to be swallowed. Once consumed by “Father” Terminus, he explodes, then expands into one giant composite Terminus. He then walks off, and…the team lets him go.

The story ends with the Avengers, having been briefed by Iron Man, trying to figure out how to attack Terminus because the last time the West Coast team saw him, he was “stalk[ing] off due east.” It seems like since the bad guy was heading east, the West Coast Avengers just assumed it was the other team’s problem now. Amazing.

The second story is a parody of Nightline with Ted Koppel. The whole story is told with talking heads on TV screens. This is a device that was used to great effect in Frank Miller’s The Dark Knight Returns, and it had been imitated so much by the early Nineties that it had become a joke. It’s clear that “Media Watch” is filler, and there’s not a lot to say about it except that it’s terrible. When you write a story full of talking heads, it would help if you had a good ear for dialogue.

What would a West Coast Avengers annual be without an awful story with Firebird? In this one, Surf – three mutant Antlanteans – break into Marine World to free some whales. Firebird, who was minding her own business watching the whale show when Surf arrived, calls the team into action. By the time Pym, Wasp and Hawkeye arrive, Firebird had contained Surf. Once everyone is in one place, we have our obligatory fight. But wait…it seems that Surf only wanted to help the whales. They have no way of knowing that these tanks are there to protect the whales, not harm them, as Pym explains. When Surf asks why the whales have to perform for food, the team falls silent with guilt.

Okay, this is not good. Yeah, the message is good, but I already knew all this thanks to Star Trek IV.

Leave it to Firebird to ruin an already awful annual…

Don’t You Daaare Miss It!

Wonder Man convinces the Hawkeye, U.S. Agent, Iron Man and Vision to take his place for a personal appearance at a Monster Truck Show. Once there, no one is impressed except for U.S. Agent who can’t believe they got in for free. As the show goes on, Doctor Goodwrench appears. It turns out that he’s a mutant with the ability to converse with machines and since has become the world’s first mechanical rights activist. He wants everyone to stop abusing the trucks.

Doctor Goodwrench takes control of the machines, including Iron Man’s armor, and starts attacking. Vision, however, is able to get through to the Doctor by informing him that the trucks and tractors are unable to communicate. Doctor Goodwrench breaks down into tears as he realizes that if Vision is correct, that means he’s crazy.

This is probably the best story in the issue, and a lot of that has to do with Dwayne McDuffie’s writing. It’s clear he understands how ridiculous the premise of this story is and decides just to have fun with the characters. And it works. In fact, this is the closest the team’s been to the Justice League International – another team book I was enjoying at the same time – in terms of humor and character interaction.

Pym freaks out because he’s lost his Hyperatomic Anti-Proton Cannon, which he shrank from 16 feet long to half an inch. And now he’s tearing the room apart trying to find it. The rest of the team helps him out, while Wonder Man – whose high density could set off the cannon – is forced to stand still and eat a bowl of chips.

While the team frantically tries to find the cannon, Wonder Man finishes his bowl of chips. Unknown to him, the cannon was at the bottom of the bowl. He swallows it and it explodes inside of him. The story ends with Wonder Man saying, “Uh, I think I found it, doc!”

My favorite bit is how they inform me at the beginning of this story that it takes place between issues #53 and #54. Because this story is so important it’s paramount that I know where it fits in continuity. But now I wonder why Wonder Man didn’t show any of the effects of swallowing the Hyperatomic Anti-Proton Cannon during his fight in issue #54. Why?! WHY!? 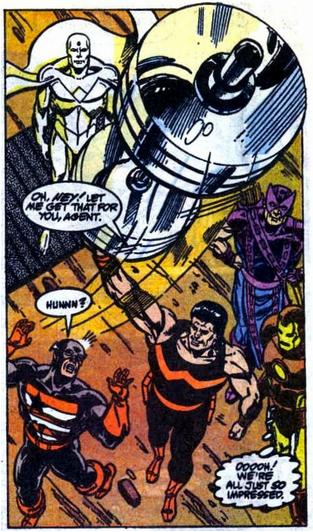 The Vision and Scarlet Witch #1

The Vision and Scarlet Witch #2