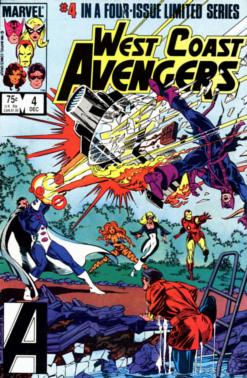 Once reunited, the team comes up with a plan to rescue Wonder Man and stop Graviton once and for all.

This issue starts off strong with Tigra’s dramatic appearance as she rises to the surface with the Shroud. From there, there’s move pretty fast as the team decides to rescue Wonder Man…from the bottom of a pool.

Jim Rhodes finally steps up and announces to everyone that he’s really Iron Man. It’s a cool moment, but there’s really no reason why this particular time is any different to reveal himself than before. I’m just thankful that he doesn’t do the glove thing again like he did with Tigra. Hawkeye gets annoyed about all this, as he doesn’t like the idea of working with an amateur Iron Man. But naturally, thanks to a convenient one panel flashback, Hawkeye ends up accepting Rhodes as Iron Man.

Now we get to the big plan to rescue Wonder Man and stop Graviton. It’s strangely complicated and falls apart when you think about it too closely. But here goes: Tigra, pretending to be Madame Masque, and Hawkeye, dressed up as a hybrid of Simon & Simon, visit Graviton to see about consolidating the South California gangs. Madame Masque then flirts with Graviton and wins his trust. Just then, Iron Man appears and attacks. Graviton protects Madame Masque while Iron Man knocks Hawkeye into the bushes. Mockingbird, who has been pretending to be a bartender in Graviton’s pad (how this happened is not explained), appears and attacks. A dummy dressed like Hawkeye flies in on a rocket bike thing, which Graviton gets rid of easily. But the whole point of the dummy was to allow Hawkeye access to his costume and gear. While all of this is going down, Wonder Man has been slowly working his way to the top of the pool (Bob Hall really sells these scenes, by the way) and attacks Graviton.

So now the whole team is hitting Graviton with everything it has, particularly Iron Man who has a cool moment with an electric substation, until he’s weakened. Tigra then reveals that she was really Madame Masque and punches Graviton in the face, and Hawkeye appears with some tranquilizer arrows, and he’s finally down.

The thing is, it’s made clear that Graviton has been drugged somehow, which is why the team had a shot in defeating him. I’m assuming that it was Mockingbird pretending to be Diane Chambers that did it. But if that’s the case, why couldn’t she just use a stronger drug that would’ve knocked him out completely, rather than just make his groggy? Then the team could’ve swooped in and spent the evening writing stupid things on his face with a magic marker.

Not the best plan in the world. But it did rescue Wonder Man from the bottom of the pool.

The issue ends with the team finally reunited at the BBQ. And Wonder Man and Tigra get creepy and all touchy-feely (see image below) and Hawkeye making one of his overcompensating pep talks.

Boast! Despite the over complicated nature of the team’s plan, this is a fun issue. Every one gets a moment or two to really shine, especially Iron Man and Wonder Man. I’m happy to see the mini-series ending on a high note.

There’s nothing like a little awkward flirting while everyone watches…