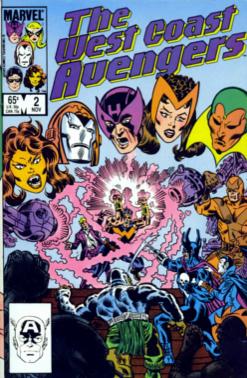 The team unites with the Vision and the Scarlet Witch in New Jersey just in time for the readers to be overwhelmed with one flashback after another. Meanwhile, Hank Pym and Wonder Man are held captive by the Grim Reaper and his minions.

This issue continues from The Vision and the Scarlet Witch #1.

If I said any of this out loud, no one would ever believe I ever had sex.

Also, I’m pretty sure I’ve never typed the word brainwaves so much in my life.

There’s a lot of serious brother issues going on here. On top of this is the whole Ultron calling Hank Pym “Dad” all the time.

My favorite part of the issue is when the team go to Simon Williams’ mother’s house who is still grieving the loss of her boy. And Vision steps up and tells her that part of her son is in his brain. After a panel of disbelief, they embrace, and Vision says, “I am not he–I will never be he–But I love you, mother! Forgive me!” Well done, Vision. She’ll be having nightmares for weeks now.

The issue ends with Ultron attacking the Avengers in their quinjet, leading Hawkeye to yell out “Avengers assemble!” even though they’re all standing right behind him.

Also, it should be noted that the 1985 version of the Iron Man armor made Tony look really fat.

Roast! Seriously, how many flashbacks can one comic book have? It’s beginning to feel like a budget saving flashback episode from pretty much any Eighties sitcom you can think of. And this is the second issue of a new ongoing monthly? Yikes. 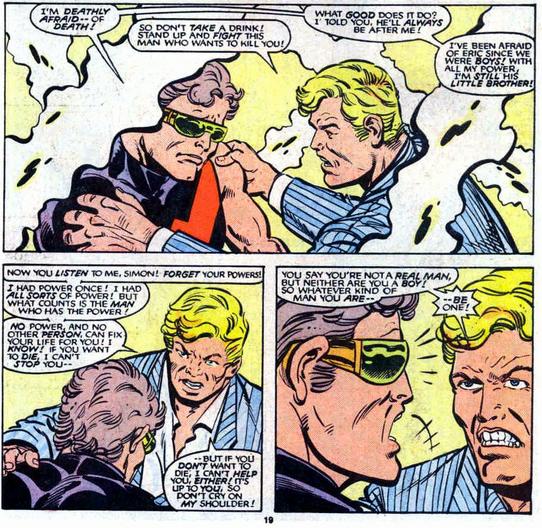