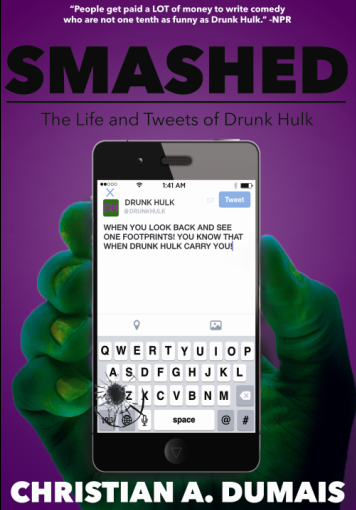 SMASHED: The Life and Tweets of Drunk Hulk

For years now you have gotten to see pop culture, history and politics unfold through the blurry eyes of everyone’s favorite inebriated Twitter hero: @DRUNKHULK. Now you can look back in anger, take the walk of shame and relive the glory days through this incredible compilation of hilarious tweets.

✓ The definitive tweets of Drunk Hulk in chronological order with annotations.

✓ Essays (including “On Drunk Tweeting” – the viral hit available in print for the first time).

✓ Tons of behind-the-scenes information about one of Twitter’s biggest come-from-nowhere success stories.

YOU CAN HAVE YOUR CAKE!
AND EAT IT TOO! ESPECIALLY
IF YOU BAKE THAT CAKE IN SECRET!

Please think about your answer for a moment and we’ll come back to this, I promise.

Because I need to tell you a little bit about Drunk Hulk; but before I can do that, I need to explain more about who and where I am.

I’ve been living in Poland for eleven years. When a Pole realizes I’m an American living here, their first question – usually in an incredulous voice – is always “Why Poland?”

For the longest time I was unable to articulate why. Not so much why I picked Poland, but why I was so willing to leave America. Because the story is so uneventful, I ended up creating stories that involved police chases or chloroform or broken time machines, depending on my mood. When people ask me today, my simple answer is “Because I feel like I’m a better American living abroad than I ever was at home.”

If you want to know who you are and what you truly stand for – not only as a citizen, but as a person – leave your country. Leave everything that you’re familiar with, force yourself to break your routines and move somewhere far away, even if it’s just one year. You won’t be a tourist, which means you’ll be there too long for your choices to be inconsequential. You will meet people. You will connect. A new life will begin to overwrite your old life, and the only constant that remains will be you. Once you understand that comes the moment where you have to look at yourself and determine if you like what you see.

One of the things I’ve learned about myself living in Poland is that I hadn’t been a sincere person. I’d subscribed to irony – one of the fundamental conditions of being American of my generation – for so long that I worry it took over my identity.

Here’s a simple lesson I learned right away.

I don’t really care what your answer is when I ask how you are doing.

The question has become a greeting. It carries the same amount of weight as a friendly hello; which is probably why when we are walking down the street and see someone familiar and ask how they’re doing, we rarely stop. We just toss back a “Good!” or “Great!” and keep on walking.

My favorite is when we don’t even answer the question, but just throw it back instead:

I didn’t really notice this until I was at work one day here in Poland and I saw a colleague walking down the hall. He said hello and I instinctively said, “How are you?” And the strangest thing happened. He stopped and immediately started telling me about how terrible his day was. He told me everything. At one point I thought he was going to cry. It seemed like he was relieved someone had finally wanted to know how he was doing:

“How am I doing, Christian? Not good, not good at all. My favorite hookers were murdered!”

And this happened again and again, on the streets, in stores, everywhere.

You see, when you ask a Polish person how they’re doing THEY WILL TELL YOU! That’s when I realized that I haven’t been sincere with the question. Asking someone how they’re doing and really listening to their answer is a form of liberation. It can make a world of difference to someone. Once I understood that I was doing something as basic as “How are you?” wrong, I started to wonder what else I was doing erroneously.

I wasn’t fully aware of irony until I was 16 years old. In fact, my friend Sean Murray (who did the cover to this book, by the way!) was the one who taught me how to do it. We were doing the morning news at our high school (we were big time!) and before we went on the air he said he wanted to do the entire thing sarcastically. I didn’t really know what he meant, so he said just do what he did. At the time, our high school football was notoriously bad and sharing the news of a victorious game was a rare event. When Sean started talking about the previous week’s game and how the team was defeated, his tone changed and he transformed into an entirely different person. He delivered the game results and explained how the team was working hard to change their run of bad luck, yet every word out of his mouth was the exact opposite of what he was saying. Listening to him speak was an amazing epiphany. I had heard sarcasm before countless times in my favorite shows and movies, but it never occurred to me until then that I could communicate like that in real life.

This was a major turning point for me.

In the States, sarcasm became the primary form of communication in the circles I ran in. We always meant the opposite of what we said. If I told you I really wanted to see that movie, you knew that I didn’t want to see that movie. If you said that was the best sex you ever had, I knew I performed terribly…again. When I said that I loved you, you knew that we weren’t going to last another week. The only time we connected emotionally was when we were so drunk there’d be no way of remembering it the next day.

Sarcasm, like humor, is communication’s self-defense mode. You can maneuver through life a whole lot easier when you’re disconnected. When I think about my life in the States, with few exceptions, I see myself maneuvering through my day-to-day one step removed from the process.

As someone who has studied and taught 20th century American Literature, I know that when you take away the flourishes and the gimmicks, what you’re really left with are a ton of stories that shout, “You’ve got to connect.” And we don’t.

I think our generation embraced irony so much that we let it get the better of us. By the time we had the Internet to bring us all together, we had embraced anonymity and derision. Say what you want about the younger generation, but they’re coming across far more sincerely than we ever did. They’re using the technology to confess, share their feelings, admit they’re confused, call out bullies instead of ignoring them, and most importantly, they’re reaching out. Sometimes they get slapped away, but at least they’re trying. And considering that the Internet gives them a better preview of the enormous Bag of Shit they’re going to inherit when they get older than we ever had, that’s saying an awful lot.

Oh, that’s right, I want to tell you how I’m doing. Or you can keep on walking. I’d understand.

I’ll tell you that I’m happy today even though it’s cold out and the days are getting shorter again. I have two beautiful kids who are two years old and when I see them I’m scared I will screw things up, because I don’t know what I’m doing. Does anyone?

I feel like we’re not supposed to say this out loud, that we have to put on a game face no matter what. I don’t believe in monsters and ghosts right now, but ask me again when it’s dark and I’m the only one awake in the house. I still don’t trust basements no matter what time of the day it is. I have an irrational fear of sharks and long hallways, but that pales in comparison to my fear of letting my wife down. Having said all that, I love public speaking and the thing that excites me about it is the possibility of speaking to a large audience completely unprepared.

I believe you’re a good person, and if we’ve never met, I’d like to know you. I’m sorry I spent such a long part of my life pushing you away. I care about you, but I feel like I don’t do a good enough job showing that. You’re probably hurting because, really, everyone is hurting. And I’m sorry. I want to help change that.

I still get excited every day at the possibility of making you laugh on Twitter as Drunk Hulk. I know the account is completely ridiculous, but knowing that I’m making you smile or laugh has added colors to my life that I didn’t know existed. I hope you’re laughing at yourself too. I wish my teachers had taught me that when I was growing up, because being able to laugh at yourself is another great way to understand who you are as a person. More importantly, it’s a sign of self-confidence – an affirmation of the solidity of your convictions.

I’m writing this in my kitchen, which is the most important room in any house. When I’m done with this piece, I’m going to bake an apple pie for my wife. One day I hope to bake you a pie too.

I’m trying, I really, really am.

But I’m doing great. I’m happy. I’m learning something new every day. I’m far away from home, but I am home. I’ve always been home.

This is just one of the many things I’ve learned over the last five years being Drunk Hulk. And now that you’ve gotten a brief glimpse of the end, let’s back up so you’ll know how I got here; because that’s the most important part.

But first, please, how are you?